Tmux Tutorial: How to Install and Use with Command Examples

Home » SysAdmin » Tmux Tutorial: How to Install and Use with Command Examples

Tmux is a Linux application that allows multitasking in a terminal window. It stands for Terminal Multiplexing, and is based around sessions. Users can start a process, switch to a new one, detach from a running process, and reattach to a running process.

In this Tmux tutorial learn how to install tmux, commands with examples, and how to use. 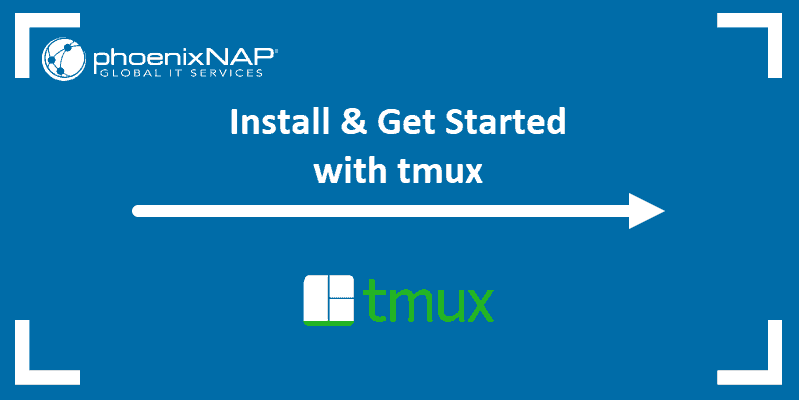 How to Install tmux

Install Tmux on Ubuntu and Debian 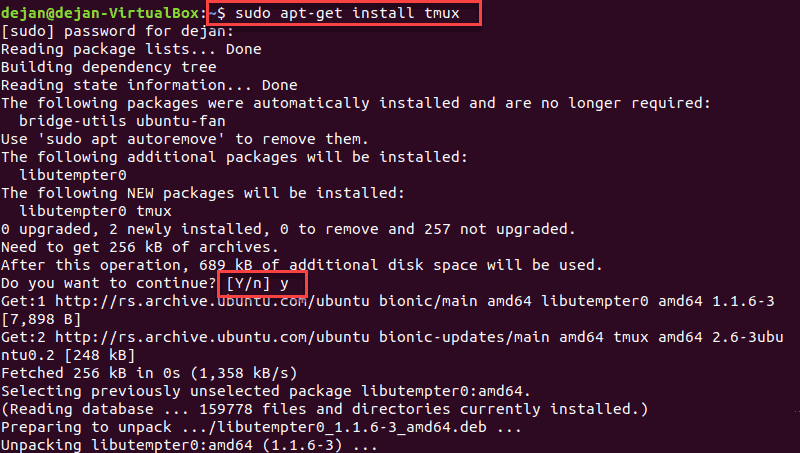 Install Tmux on RedHat and CentOS

In Tmux, you will be working with sessions, windows and panes.

Use tmux panes, windows and sessions to organize your tasks in a logical manner.

Tmux is controlled by pressing CTRL+b, followed by a hotkey. The commands below are the ones most commonly used.

Note: tmux command usage may differ from version to version. Your tmux version might not support all of the commands listed below. For more information see the official tmux changelog.

To start a new session, in a terminal window type:

Your screen will change and display a status bar at the bottom. In the lower-left, you’ll see the name and number for the window: [0] 0:bash*

To start a new named session, type the following command:

Instead of session_name, type the name you want assign to the session.

Tmux allows splitting the screen both horizontally and vertically. 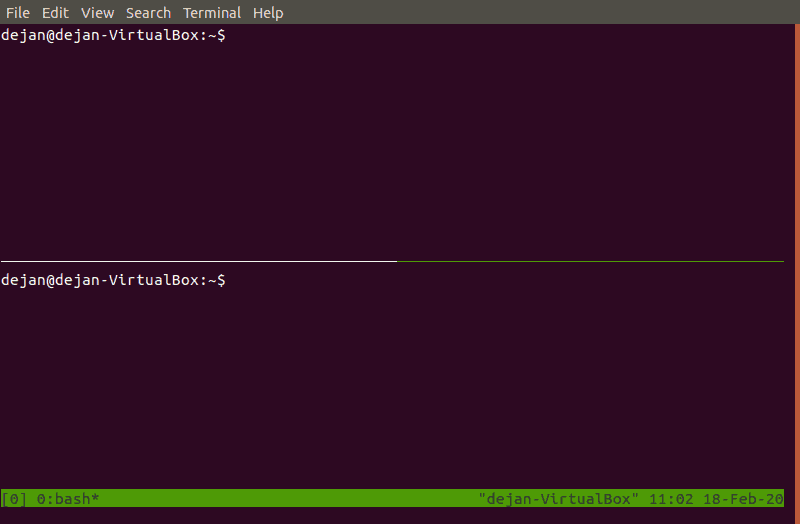 If you need to exit a pane, just type exit and press Enter. Alternatively, press CTRL+d. The currently selected pane will close. 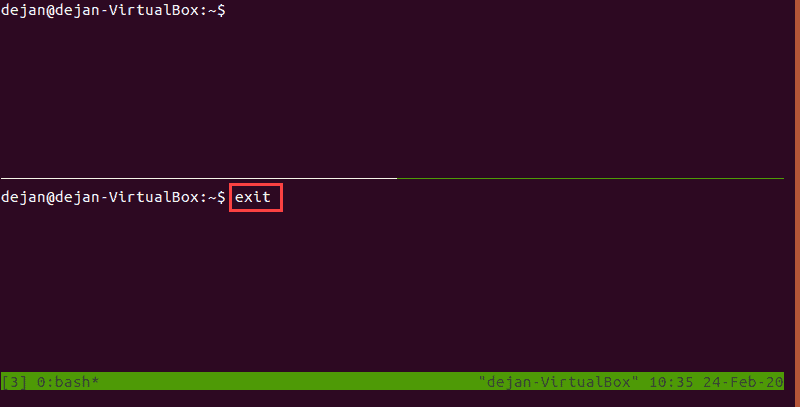 The pane you’re working in is highlighted in green. To toggle between panes, use CTRL+b+o.

You can change the size of each pane. To do so, press CTRL+b+:.

The bottom bar will change from green to yellow. Now you can type a command to resize the pane:

resize-pane -D – Moves the boundary line for the pane downward.

resize-pane -U – Moves the boundary line for the pane upward.

resize-pane -R – Moves the boundary line for the pane right.

resize-pane -L – Moves the boundary line for the pane left.

You may also specify a specific number of cells to move the boundary line. For example:

You can specify a different cell than the one you’re working in. To resize Cell 2 (lower right):

Resizing has a couple of considerations. First, resizing only works on the boundary line between cells. If the cell doesn’t have a boundary line, the command won’t work. For example, trying to resize the upper cell right won’t work, because it’s already the full width of the screen.

Zoom in to Pane

Zooming into a pane works just like maximizing a window in a graphical interface (GUI).

This will expand the current pane. Use the same command to set it back to normal.

Tmux can be used to keep a process working in the background. You can detach from the current session by typing:

Your system will drop to a normal command line. There should be an output that reads [detached (from session X)].

You can re-attach to the session by typing:

The system will re-enter the live tmux session, and pick up just where you left off.

To attach to a specific named session:

Instead of session_name, type the real name of the session.

Note: If you’re connected remotely to a Linux server with SSH, this is a handy way to preserve a session.  You can detach from the session on one computer, switch to a second computer, and reconnect to the server, and re-attach to the same session.  Unlike some other applications, tmux runs remotely on the server.

Your screen can become cluttered if you have too many panes open. Create a new full-screen window by entering CTRL+b+c.

To rename a window, switch to it and use the comma key: CTRL+b+,

The status bar at the bottom will change color to yellow. You can backspace to delete the existing name, then type a new name for this window.

To switch to the next window in order press: CTRL+b+n

To switch to the previous window press: CTRL+b+p

You can display an interactive list of windows with CTRL+b+w.

Use the up/down arrow keys to select the window you want to use, then press enter.

Close a tmux window with CTRL+b+&. Confirm your choice by typing y.

Closing all windows will exit tmux.

How to Use and Configure tmux

Like most Linux applications, tmux is highly configurable. Edit the tmux.conf file to make changes.

By default, tmux uses the CTRL+b combination to activate functions. To change it, edit the configuration file with a text editor of your liking. We will be using nano:

Save the changes and exit. Now, whenever you use tmux, you’ll use CTRL+a to activate functions.

Note: If you have any active tmux sessions, the changes won’t take effect until they are closed and restarted. Detaching will not work.

You can remap function keys. Open the /etc/tmux.conf file for editing:

Save and exit. This remaps the horizontal split to CTRL+b+h, and the vertical split key to CTRL+b+v.

Note: You can remap any function key in this manner. Use single-quote signs around a key to make sure the system interprets it correctly.

Open the configuration file for editing:

You may use a numerical code (0 – 255) to specify a color. The # sign marks a comment, which is used to explain the change. This lets you make notes without the system reading the text as code.

Save the changes and exit the file. 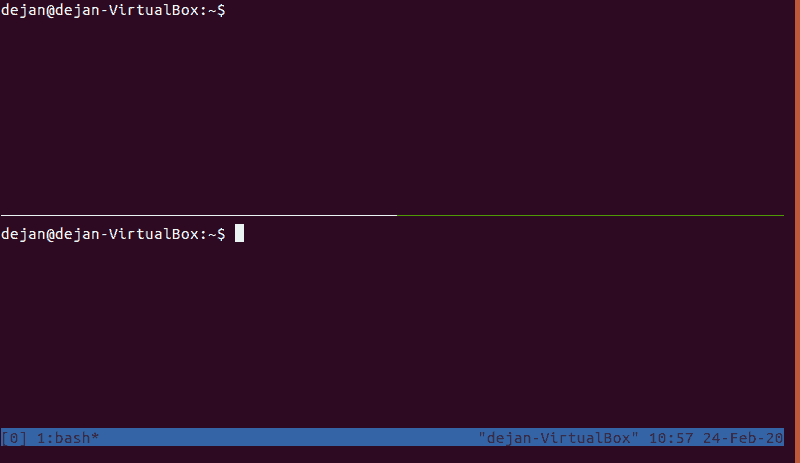 Now when you display the windows or panes, numbering will start at 1 instead of 0.
Save the changes and exit the file.

Undoubtedly, tmux adds a handy set of features to your terminal window. Options like windowing and reattaching to a session make it a powerful tool.

Dejan Tucakov
Dejan is the Head of Content at phoenixNAP with over 7 years of experience in Web publishing and technical writing. Prior to joining PNAP, he was Chief Editor of several websites striving to advocate for emerging technologies. He is dedicated to simplifying complex notions and providing meaningful insight into data center and cloud technology.
Next you should read
SysAdmin Web Servers
Linux Commands Cheat Sheet: With Examples
A list of all the important Linux commands in one place. Find the command you need, whenever you need it or...
Read more
DevOps and Development SysAdmin
How to Install Vim 8.2 on CentOS 7
Official repositories struggle to keep pace with updates and new software versions. This article provides...
Read more
Security SysAdmin
How to Kill a Process in Linux? Commands to Terminate
If a Linux process becomes unresponsive or is consuming too many resources, you may need to kill it. Most...
Read more
SysAdmin
How To Use grep Command In Linux/UNIX
This guide details the most useful grep commands for Linux / Unix systems. After going through all the...
Read more
© 2021 Copyright phoenixNAP | Global IT Services. All Rights Reserved.