News that RHEL was rebuilding its release cycle and sending CentOS 8 into early retirement was not taken lightly. Only one year after its release, Red Hat decided to cut short the CentOS 8 lifecycle by 8 years. CentOS Stream, an upstream version of Red Hat, was assigned to take its place.

As discontent among CentOS users grew, RHEL decided to address the issue and present a solution for CentOS users.

In this article, you will learn more about RHEL’s free and low-cost programs. 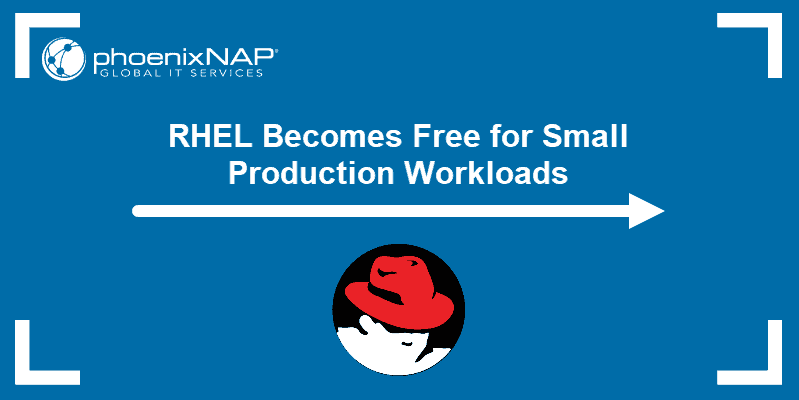 The no-cost RHEL program (previously known as the Red Hat Enterprise Linux Developer Subscription) has been available for some time now. However, the subscription was limited to single-machine developers. The key difference between no-cost RHEL and the subscription used by enterprises in production is that the second option is entitled to systems.

RHEL decided to modify the terms, allowing users with the Individual Developer subscription to use it for up to 16 systems. This lets you use self-supported RHEL for small production workloads for free. To do so, you need to sign in with a Red Hat account and download RHEL.

Don’t worry about hidden fees. The company emphasizes that this move is not a sales program – it is free, without any caveats.

Another issue that had to be addressed was that the RH Developer program was limited to an individual developer. Therefore, Red Hat decided to give development teams access to the program as well. You can add development teams to your existing individual subscription for free.

The new program should be available from February 1, 2021, and will also be able to run on major public clouds.

Note: The newly introduced option is a good solution for many CentOS users who weren’t ready to switch to a different operating system. However, the early CentOS 8 EOL has already led many to install Ubuntu 20.04 or Debian 10.

The Replacement for CentOS 8?

Red Hat is still in the process of figuring out how to ease the transition from CentOS’s original release cycle to the new one. Still, many issues need to be dealt with if they want to keep their customers from switching to another OS.

Currently, the company is confident that terminating CentOS 8 and moving towards CentOS Stream is the right decision. On the other hand, the no-cost RHEL changes show a need to find a better replacement for CentOS 8.

The fact that RHEL recognizes and is trying to solve some of the problems of completely moving to CentOS Stream brings hope to the large CentOS community.

Introducing no-cost RHEL and including development teams could be a step in the right direction for a smoother transition.

We will be looking closely for more changes as the company announces it is not done “delivering more ways to get RHEL easily”.

Sofija Simic
Sofija Simic is an aspiring Technical Writer at phoenixNAP. Alongside her educational background in teaching and writing, she has had a lifelong passion for information technology. She is committed to unscrambling confusing IT concepts and streamlining intricate software installations.
Next you should read
Networking SysAdmin
How to Install and Use ifconfig on CentOS 7
The ifconfig command is a tool for network interface management that is used to enable/disable interfaces...
Read more
DevOps and Development SysAdmin
CentOS 8 Early EOL in 2021 and CentOS Stream
CentOS 8 was released in 2019 and brought promising features to the popular Linux distro. Although it had an...
Read more
Networking SysAdmin
How to Install dig on CentOS 7 and 8
The dig command is commonly used among network and system administrators. It is an important DNS tool for...
Read more
Bare Metal Servers SysAdmin
How to Install IPMItool on Centos 7/8 & Ubuntu 18.04/20.04
This article helps you install IPMItool on your CentOS or Ubuntu system. Download, install and enable...
Read more
© 2021 Copyright phoenixNAP | Global IT Services. All Rights Reserved.