How to Use the Linux tee Command

Home » SysAdmin » How to Use the Linux tee Command

When the user executes a command in a Linux interactive shell, the output displays in the text terminal. However, there are ways to change this behavior using additional shell commands connected in a pipeline.

In this tutorial, you will learn how to use the tee command in Linux to manage the output of a command. 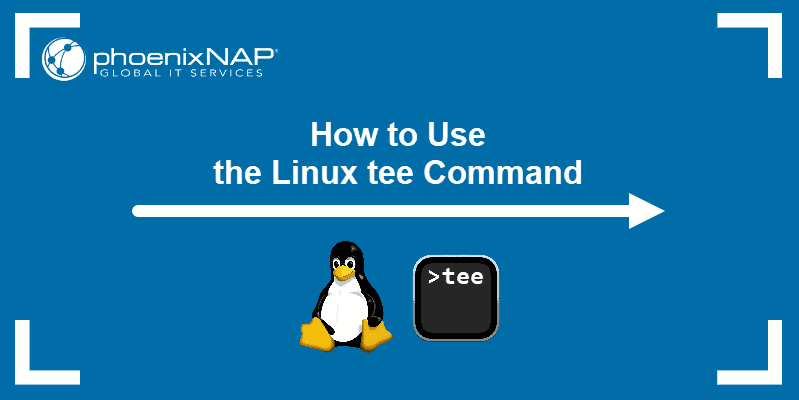 What Does tee Command Do in Linux?

The tee command reads standard input (stdin) and writes it to both standard output (stdout) and one or more files. tee is usually part of a pipeline, and any number of commands can precede or follow it. 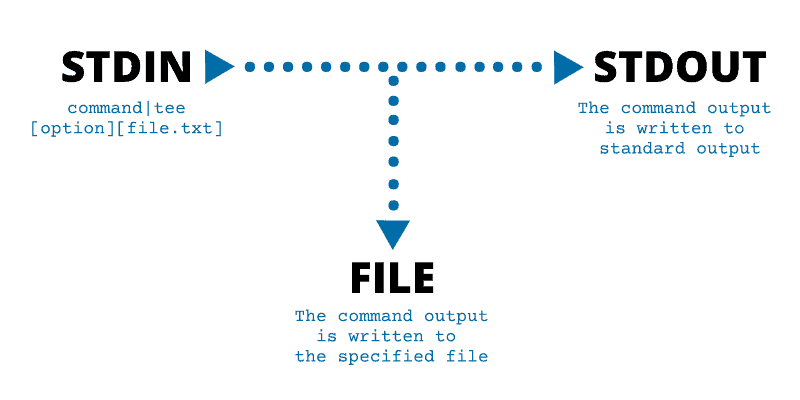 Note: To process standard inputs in Linux, you can use the xargs command which can be used in combination with other commands.

tee Commands in Linux With Examples

The tee command is used alone or with additional options. The following sections list the available options and provide command usage examples.

The basic syntax for the tee command is:

The example below demonstrates the use of tee to create a file that stores information about a network interface while providing the same output in the terminal:

The cat command confirms that tee successfully wrote the output of ifconfig to the file example.txt:

If the file used for the command already exists, tee overwrites the previous contents of the file.

Append to the Given File

Overwriting the file’s content is the default behavior of the tee command. Use argument -a (or --append) to add the command output to the end of the file.

For example, use the echo command to append a line of text to a file:

Confirm the successful addition with the cat command:

Use tee followed by any number of files to write the same output to each of them:

The example below shows writing the output of the echo command to two files:

To tell tee to store the command output in a file and skip the terminal output, use the following syntax:

Redirect Output of One Command to Another

tee does not have to be the last command in the pipeline. Use it to forward the output to another command:

In the following example, tee stores the output of the ls command to example.txt and passes the content of that file to the grep command, which finds and displays all instances of the word “example”:

To enable tee to exit properly even after the previous command has been interrupted, add the argument -i (or --ignore-interrupts):

The next example shows tee writing output from the ping command and completing the action successfully even after ping is interrupted with Ctrl+C:

To enable tee to write to a root-owned file or file belonging to another user, place the sudo command right before tee.

The example below shows an unsuccessful attempt to write to the root-owned sudoex.txt. When the sudo command is added, the operation completes:

If you open and edit a root-owned file in Vim without using the sudo command, trying to save changes produces an error:

To override this error, type the following into Vim:

After you enter the sudo password, Vim displays a warning but writes the changes to the file.

Note: To properly manage files in Vim, especially when executing changes, you need to know How To Save A File In Vim & Exit and How To Undo And Redo Changes In Vim.

To instruct tee to print an error message when the process fails, use the -p argument:

The default action of tee -p is to exit and print the error message immediately upon detecting the error writing to a pipe. To change the command’s behavior on write error, use the --output-error argument, followed by the mode specifying the behavior:

There are four possible modes:

Use tee Command with Bash Script

The tee command is often found in bash scripts. Consider the following example:

Writing script output to a log file is usually performed with the >operator:

The command above creates a log file but does not write anything to standard output.

Use tee to create a log file and see the output in the terminal:

See the current version of the tee command by typing:

For the instructions regarding the tee command syntax and the available arguments, use the command’s help argument:

By reading this tutorial, you learned how to use the tee command in a pipeline to manage the command output. The article also talked about the use of tee in bash scripts.

Was this article helpful?
YesNo
Share on TwitterShare on FacebookShare on LinkedInShare on Email

Marko Aleksic
Marko Aleksić is a Technical Writer at phoenixNAP. His innate curiosity regarding all things IT, combined with over a decade long background in writing, teaching and working in IT-related fields, led him to technical writing, where he has an opportunity to employ his skills and make technology less daunting to everyone.
Next you should read
DevOps and Development SysAdmin
Vim Commands Cheat Sheet
Vim is an open-source text editor found in most Linux distributions. This article lists all the commonly used...
Read more
SysAdmin Web Servers
Linux Commands Cheat Sheet: With Examples
A list of all the important Linux commands in one place. Find the command you need, whenever you need it or...
Read more
SysAdmin Web Servers
How to Create a File in Linux Using Terminal/Command Line
Creating a file in Linux might seem straightforward, but there are some surprising...
Read more
SysAdmin
How To Use grep Command In Linux/UNIX
This guide details the most useful grep commands for Linux / Unix systems. After going through...
Read more
© 2021 Copyright phoenixNAP | Global IT Services. All Rights Reserved.