How to use Linux Shutdown Command with Examples

Home » SysAdmin » How to use Linux Shutdown Command with Examples

All Linux users and system administrators need to know how to shut down the entire system safely. There are several options to do so, including scheduling a shutdown at a specific time, shutting down immediately, broadcasting a unique message, and so on.

In this tutorial, learn how to use the Linux shutdown command with examples. 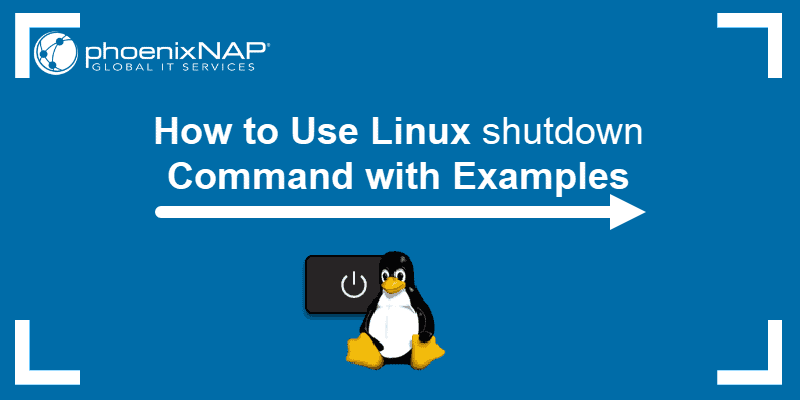 Before going into specific ways to shut down your Linux system, you should understand the basic syntax of the shutdown command:

Note: If you need to reboot instead of shut down the system, refer to How To Restart Or Reboot Linux Server From The Command Line.

How to Use the shutdown Command

To use the shutdown command on Linux systems, a  root user or a user with sudo privileges is required.

If you use the command without additional arguments, running sudo shutdown in a terminal window executes the shutdown in 60 seconds.

In the image below, see the output received after running the shutdown command.

Shutdown With All Parameters

To view all parameters when shutting down the Linux system, use the following command:

The output displays a list of shutdown parameters, as well as a description for each.

How to Shut Down the System at a Specific Time

To schedule a shutdown, add the [time] argument and specify when you want it to take place. There are two ways to shut down the system at a specific time – using the absolute or relative time format.

The absolute time follows the format hh:mm and allows you to schedule a shutdown at a specified time. The command follows the syntax:

For example, to require a shutdown at 7 AM in the morning, the command is:

Alternatively, use the relative format (+m) and schedule a shutdown in a defined number of minutes from the time you run the command. In that case, the command syntax is:

To shut down the system in 20 minutes, run:

How to Shut Down the System Immediately

As previously mentioned, running the shutdown command without any arguments prompts the system to shut down a minute after running the command. However, if you require an immediate shutdown, use:

Another option would be to schedule a shutdown using the relative time format with the value 0, as in the command below:

How to Broadcast a Custom Message

Once you schedule a system shutdown, all users within the system receive a message notifying them of the shutdown. To add a custom message to the shutdown notification to inform the users what is about to take place.

You can add a [message] only if the command also includes the [time] attribute:

For instance, to shut down the system in 20 minutes and broadcast the message System Upgrade, run:

Note: Another way to broadcast messages to users in Linux is via the wall command.

How to Cancel a Scheduled Shutdown

To cancel a scheduled shutdown, use the command:

You can also add a message to notify users that the shutdown is canceled. To do so, add the [message] option (within quotations) to the command above. For example:

This article includes all the basic shutdown commands every Linux user should know. Utilizing this command is a safe way to shut down your system. Also, it is a useful method of informing all users about scheduled shutdowns.

Sofija Simic
Sofija Simic is an aspiring Technical Writer at phoenixNAP. Alongside her educational background in teaching and writing, she has had a lifelong passion for information technology. She is committed to unscrambling confusing IT concepts and streamlining intricate software installations.
Next you should read
SysAdmin Web Servers
How to Start, Stop, and Restart Services in Linux
In most modern Linux operating systems, managing a service is quite simple when it comes to basic commands...
Read more
SysAdmin Web Servers
Linux Commands Cheat Sheet: With Examples
A list of all the important Linux commands in one place. Find the command you need, whenever you need it or...
Read more
DevOps and Development SysAdmin
How to Delete Line in Vim on Linux
Vim allows you to delete entire lines, words or characters using various Vim commands. Learn the most...
Read more
SysAdmin Web Servers
How to Get the Size of a Directory in Linux
Use the command line interface to display directory size and for display disk space. This guide will help you...
Read more
© 2021 Copyright phoenixNAP | Global IT Services. All Rights Reserved.