The chown command changes user ownership of a file, directory, or link in Linux. Every file is associated with an owning user or group. It is critical to configure file and folder permissions properly.

In this tutorial, learn how to use the Linux chown command with examples provided. 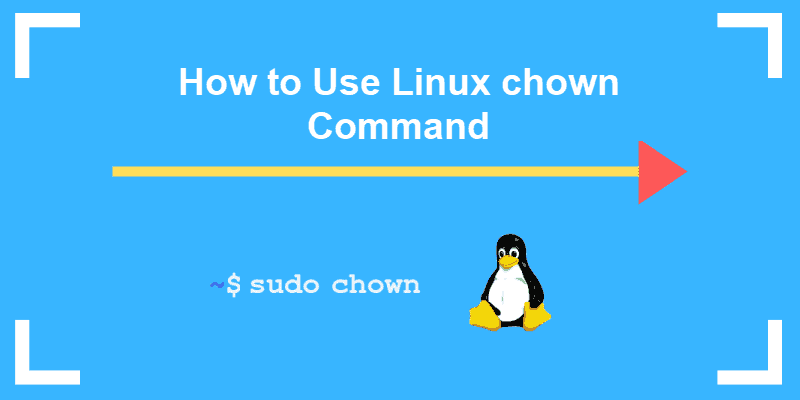 Superuser permissions are necessary to execute the chown command.

To check the chown version on your machine, enter:

The output will look similar to this:

How to Check Ownership of a File in Linux

First, you need to know the original file owner or group before making ownership changes using the chown command.

To check the group or ownership of Linux files and directories in the current location, run the following command:

An example output of the ls command looks like this:

How to Change the Owner of a File

Changing the owner of a file with chown requires you to specify the new owner and the file. The format of the command is:

The following command changes the ownership of a file sample from root to the user test:

Use the same format to change the ownership for both files and directories.

Change the Owner of a File With UID

Instead of a username, you can specify a user ID to change the ownership of a file.

Make sure there is no user with the same name as the numeric UID. If there is, the chown command gives priority to the username, not the UID.

Note: To check a user’s ID, run id -u USERNAME from the terminal.

List the target file names after the new user to change the ownership for multiple files. Use single spaces between the file names.

In the following example, root will be the new owner of files sample2 and sample3.

Combine file names and directory names to change their ownership with one command. For example:

Do not forget that the commands are case sensitive.

How to Change the Group of a File

With chown, you can change a group for a file or directory without changing the owning user. The result is the same as using the chgrp command.

Run the chown command using the colon and a group name:

The following example changes the group of the file sample3 from grouptest to group3.

Change the Group of a File Using GID

Similar to UID, use a group ID (GID) instead of a group name to change the group of a file.

Change Owner and the Group

To assign a new owner of a file and change its group at the same time, run the chown command in this format:

Therefore, to set linuxuser as the new owner and group2 as the new group of the file sample2:

Remember that there are no spaces before or after the colon.

The chown command assigns the owner’s login group to the file when no group is specified.

To do so, define a new user followed by a colon, space, and the target file:

The following example changes the group ownership to the login group of linuxuser:

Transfer Ownership and Group Settings from One File to Another

Rather than changing the ownership to a specific user, you can use the owner and a group of a reference file.

Add the --referenceoption to the chown command to copy the settings from one file to another:

Remember to type in the names of the files correctly to avoid the error message:

The chown command --from option lets you verify the current owner and group and then apply changes.

The chown syntax for checking both the user and group looks like this:

The example below shows we first verified the ownership and the group of the file sample3:

Then chown changed the owner to linuxuser and the group to group3.

The option --fromcan be used to validate only the current user of a file.

Similar to the previous section, you can validate only the group of a file using the option --from.

Here is an example where we verified the current group before changing it:

Remember to use the colon for both group names to avoid error messages.

How to Recursively Change File Ownership

The chown command allows changing the ownership of all files and subdirectories within a specified directory. Add the -R option to the command to do so:

In the following example, we will recursively change the owner and the group for all files and directories in Dir1.

To change the owner of a symbolic link, use the -h option. Otherwise, the ownership of the linked file will be changed.

The following image shows how symbolic links behave when -h is omitted.

To push the changes to the link, run the chown command with the -h flag:

In the following example, we changed the owner and group of a symbolic link.

By default, the terminal does not display the chown process information. To see what happens under the hood, use one of the two command line flags:

For example, if we specify the current owner as a new owner of the file:

The terminal produces the following output:

Switch from -v to -c and there will be no messages in this case. This happens because there are no owner or group changes.

The information is particularly useful with the recursive chown command:

In this example, the output lists all objects affected after running the command.

To avoid seeing potential error messages when running the chown command, use the -f option:

The example below shows the error message for a non-existent file or directory:

Adding the -f flag suppresses most error messages. However, if you specify an invalid username, the error message appears:

Now you know how to use chown command in Linux to change a file’s user and/or group ownership.

Take extra caution when changing the group or ownership of a file or directories.

Goran Jevtic
Goran combines his passions for research, writing and technology as a technical writer at phoenixNAP. Working with multiple departments and on a variety of projects, he has developed extraordinary understanding of cloud and virtualization technology trends and best practices.
Next you should read
Networking Security Web Servers
17 Nmap Commands with Examples for Linux Network & System Administrators
Nmap stands for Network Mapper. It is an open-source tool for network exploration and security auditing. With ...
Read more
SysAdmin
How to Use The APT-GET Command In Linux
Advanced Package Tool (APT) is a package management system used on Debian, Ubuntu and other Linux ...
Read more
SysAdmin Web Servers
How to List Users in Linux, List all Users Command
Linux OS is unique because of its multiuser characteristic. It allows multiple users on one system, at the ...
Read more
SysAdmin
How To Use grep Command In Linux/UNIX
This guide details the most useful grep commands for Linux / Unix systems. After going through all the ...
Read more
© 2021 Copyright phoenixNAP | Global IT Services. All Rights Reserved.