How to Install NumPy

Home » SysAdmin » How to Install NumPy

NumPy (Numerical Python) is an open-source library for the Python programming language. It is used for scientific computing and working with arrays.

Apart from its multidimensional array object, it also provides high-level functioning tools for working with arrays.

In this tutorial, you will learn how to install NumPy. 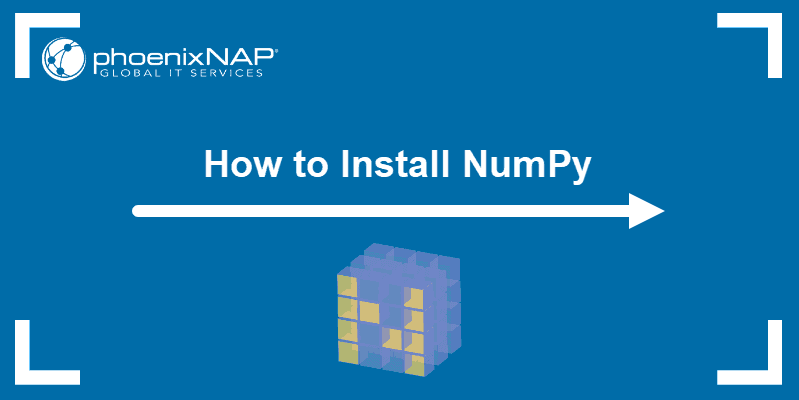 You can follow the steps outlined below and use the commands on most Linux, Mac, or Windows systems. Any irregularities in commands are noted along with instructions on how to modify them to your needs.

Before you can install NumPy, you need to know which Python version you have. This programming language comes preinstalled on most operating systems (except Windows; you will need to install Python on Windows manually).

Most likely, you have Python 2 or Python 3 installed, or even both versions.

To check whether you have Python 2, run the command:

The output should give you a version number.

To see if you have Python 3 on your system, enter the following in the terminal window:

In the example below, you can see both versions of Python are present.

If these commands do not work on your system, take a look at this article on How To Check Python Version In Linux, Mac, & Windows.

The easiest way to install NumPy is by using Pip. Pip a package manager for installing and managing Python software packages.

Unlike Python, Pip does not come preinstalled on most operating systems. Therefore, you need to set up the package manager that corresponds to the version of Python you have. If you have both versions of Python, install both Pip versions as well.

The commands below use the apt utility as we are installing on Ubuntu for the purposes of this article.

Install Pip (for Python 2) by running:

If you need Pip for Python 3, use the command:

Important: Depending on the operating system you are using, follow the instructions in one of our Pip installation guides:

Finally, verify you have successfully installed Pip by typing pip -V and/or pip3 -V in the terminal window.

With Pip set up, you can use its command line for installing NumPy.

Install NumPy with Python 2 by typing:

Pip downloads the NumPy package and notifies you it has been successfully installed.

To install NumPy with the package manager for Python 3, run:

As this is a newer version of Python, the Numpy version also differs as you can see in the image below.

Note: The commands are the same for all operating systems except for Fedora. If you are working on this OS, the command to install NumPy with Python 3 is: python3 -m pip install numpy.

Use the show command to verify whether NumPy is now part of you Python packages:

And for Pip3 type:

The output should confirm you have NumPy, which version you are using, as well as where the package is stored.

After installing NumPy you can import the package and set an alias for it.

To do so, move to the python prompt by typing one of the following commands:

Once you are in the python or python3 prompt you can import the new package and add an alias for it (in the example below it is np):

If you already have NumPy and want to upgrade to the latest version, for Pip2 use the command:

By following this guide, you should have successfully installed NumPy on your system.

Check out our introduction tutorial on Python Pandas, an open-source Python library primarily used for data analysis, which is built on top of the NumPy package and is compatible with a wide array of existing modules. The collection of tools in the Pandas package is an essential resource for preparing, transforming, and aggregating data in Python.

For more Python package tutorials, check out our other KB articles such as Best Python IDEs and more!

Sofija Simic
Sofija Simic is an aspiring Technical Writer at phoenixNAP. Alongside her educational background in teaching and writing, she has had a lifelong passion for information technology. She is committed to unscrambling confusing IT concepts and streamlining intricate software installations.
Next you should read
DevOps and Development
How To Install PIP to Manage Python Packages On Windows
PIP for Python is a utility to manage PyPI package installations from the command line. This tutorial will...
Read more
DevOps and Development SysAdmin
How to Install Pip on Ubuntu 18.04
Pip is a software utility that downloads packages from PyPI, the Python Package Index. Using PIP is like...
Read more
DevOps and Development
How to Install Latest Version Of Python 3 on CentOS 7
Python is a popular, stable, and well-performing programming language. CentOS 7 uses Python 2.7.5, but as...
Read more
DevOps and Development SysAdmin
How to Check Python Version in Linux, Mac, & Windows
Python is a popular programming language with different versions organized by release date. Certain...
Read more
© 2021 Copyright phoenixNAP | Global IT Services. All Rights Reserved.