How to Install NVIDIA Tesla Drivers on Linux or Windows

Growing demands for extreme compute power lead to the unavoidable presence of bare metal servers in today’s IT industry. Their goal is to handle the most intensive workloads by providing extreme processing power to a single tenant. No shared resources and immense scalability options position bare metal servers as a smart choice for growing infrastructures.

With GPUs (Graphic Processing Units) added to the mix, modern data centers now offer servers with parallel processing capabilities for Deep Learning and HPC (High-Performance Computing) applications. These applications are so demanding on CPU resources that all-purpose servers prove to be cost-intensive in these circumstances. NVIDIA® Tesla® GPU-accelerated servers became a cornerstone for solving today’s most complex scientific and engineering challenges.

By following this guide, you will learn how to install Nvidia Tesla Drivers on Linux and Windows. 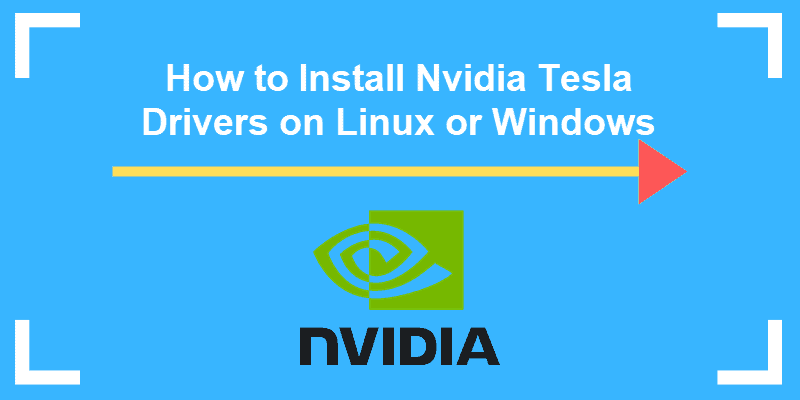 How to Install NVIDIA® Tesla® Drivers on Windows

Installing Windows drivers for a Tesla graphics card is straightforward. You may find the procedure to be similar to installing drivers for other NVIDIA GPUs. The operating system itself may install the drivers, but we highly recommend you download and install the latest version of a driver package dedicated to Tesla GPUs.

In order to make sure you are downloading the latest NVIDIA® Tesla® GPU drivers for your server, you need to use the package available on the manufacturer’s website.

Before going through the steps in the NVIDIA® Tesla® driver wizard, you will need to extract the files to the desired location.

Verify Tesla GPU Has Been Installed

Depending on the service you have, you can have up to 8 Tesla V100 GPUs in one server. Beside the NVLink Tesla V100 SXM2 GPU version shown in the Device manager above, we offer two more GPUs:

On the device list, expand the Display adapters and you should see all your NVIDIA® Tesla® cards. 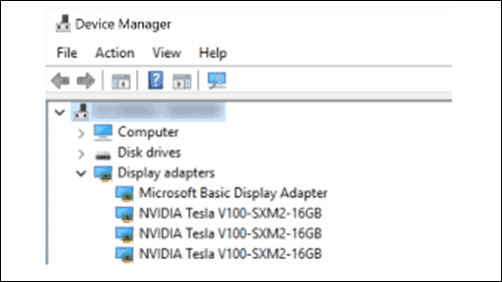 NVIDIA® Tesla® GPUs support the autoboost feature to increase performance by changing clock values for both memory and GPU core in certain conditions. You can turn off this feature and set your custom clock rates with NVIDIA System Management Interface.

To do this, load Windows PowerShell and navigate to the NVIDIA NVSMI folder:

How to Install NVIDIA® Tesla® Drivers on Linux

This section will show how to install NVIDIA drivers on an Ubuntu machine. Linux comes with open source drivers, but to achieve maximum performance of your card, you need to download and install the proprietary NVIDIA drivers. The installation procedure is the same from Ubuntu version 16.04 onward.

To download the corresponding drivers, follow the steps indicated in the Downloading the Tesla Driver Package section in this article.

If you cannot locate your Linux distribution on the list, you may need to click on “Show all Operating Systems”. 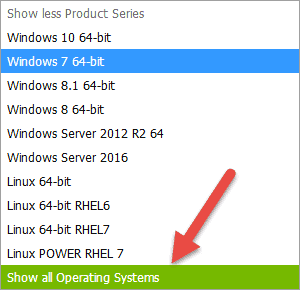 Once your download finishes, load the terminal (Ctrl+Alt+T) and navigate to the folder where you downloaded the file. Alternatively, you can download the drivers by using the wget command and the full download URL:

With the file available locally, run the following commands:

This updates the list of packages and gets the information on the newest available version.

Next, run the command to install CUDA drivers on your machine.

Wait until it finishes and then run the final command.

A reboot is necessary after the driver installation takes place.

To confirm the system is using your Tesla GPU and not the integrated one, navigate to  System Details to check hardware information.

Note: Looking for a different tutorial? Visit our guide How To Install Nvidia Drivers On Ubuntu.

There are more than 500 HPC GPU-accelerated applications that will exhibit an extreme performance boost with servers utilizing NVIDIA® Tesla® GPUs. Additionally, all available deep learning frameworks are optimized for GPUs and provide massive boosts in performance.

A single server with an NVIDIA® Tesla® V100 GPU can outperform dozens of CPU-only servers when it comes to GPU-intensive applications. This way, cost savings are substantial due to less network overhead and the reduction of overall power consumption with fewer servers running. At the core of Tesla V100 is NVIDIA Volta architecture that makes this GPU provide inference performance of up to 50 individual CPUs. In specific use cases, a single GPU’s performance is comparable to the performance of around 100 CPUs.

The benefits of deploying a server with an NVIDIA® Tesla® GPU are numerous:

PhoenixNAP offers servers with GPU capability that will fit everyone’s budget. Tesla V100 runs on Volta architecture and comes in two versions, PCI Express and SXM2 with NVLink interconnection. Tesla P40 with PCIe interface runs on Pascal architecture and it is usually used in smaller IT environments.

Depending on your computational needs, you can choose PCIe GPU-enabled servers with up to three cards. For large workload-intensive deployments, we can interconnect up to 8 Tesla V100 SXM2 NVlink GPUs to offer unparalleled HPC and Deep Learning power.

Volta Architecture succeeded Pascal but has not rendered it obsolete. Still providing extreme performance at a reasonable cost, NVIDIA® Tesla® P40 is an excellent choice in modern small to medium size deployments.

PhoenixNAP is proud to offer the best NVIDIA’s GPUs with the latest Volta architecture that brings massive improvements in performance. Tesla V100 GPU represents the fastest and most advanced parallel processor ever produced to this date. As opposed to Pascal’s architecture, Volta uses high-end TSMC 12nm manufacturing process which allows for groundbreaking compute power leaps. Inside a Tesla V100, there are almost two times more transistors than in Tesla P40, i.e. 21.1 billion with a die size of 815 mm².

One of the new Volta features is MPS: Multi-Processor Service which provides CUDA MPS server components with hardware acceleration. This leads to an improved quality of service when multiple applications are sharing the GPU. The maximum number of MPS clients has been tripled as well, when compared to Pascal architecture.

All these improvements in the Volta architecture made Tesla V100 the absolute king of the hill in the world of high performing Data Center GPUs and we are proud to offer it with our servers. With up to 8 Tesla V100 GPUs interconnected with NVLink, you are able to create an extreme performance deployment with support for every deep learning framework and over 500 HPC applications.

Goran Jevtic
Goran combines his passions for research, writing and technology as a technical writer at phoenixNAP. Working with multiple departments and on a variety of projects, he has developed extraordinary understanding of cloud and virtualization technology trends and best practices.
Next you should read
SysAdmin Web Servers
How To Install Nvidia Drivers On Ubuntu 20.04
Ubuntu 20.04 comes with an open-source Nouveau GPU driver out of the box. See how to install the proprietary Nvidia drivers for your GPU.
Read more
Bare Metal Servers Web Servers
Bare Metal Cloud Portal Quick Start Guide
Follow the sections in this Bare Metal Cloud Portal guide to learn how to navigate through the portal. This guide contains everything you need to get started using BMC servers.
Read more
Bare Metal Servers Web Servers
How To Deploy A Bare Metal Cloud Server
This article shows how to deploy a new Bare Metal Cloud server in nine simple steps. Follow the instructions to create a server and view server details successfully.
Read more
Bare Metal Servers Virtualization
How To Access BMC Windows Server
Learn how to establish an SSH connection to your new Bare Metal Cloud Windows server using either a key pair or username and password. Follow the requirements to use SSH successfully with your BMC instance.
Read more
© 2021 Copyright phoenixNAP | Global IT Services. All Rights Reserved.