How to Deploy PostgreSQL on Docker Container

Home » Databases » How to Deploy PostgreSQL on Docker Container

PostgreSQL, also referred to as Postgres, is an open-source, object-relational database management system. Developers often opt for this relational database as it is free, stable, and flexible. In fact, PostgreSQL and MySQL are the most popular Relational Database Management Systems.

Today, Postgres is one of the most widely used Docker images that run in containers. The popularity of containerized databases is attributed to the simplicity with which they can be deployed. Also, instead of having one centralized database for many applications, developers can devote a PostgreSQL container for each application.

In this tutorial, you will learn how to run PostgreSQL on a Docker container. 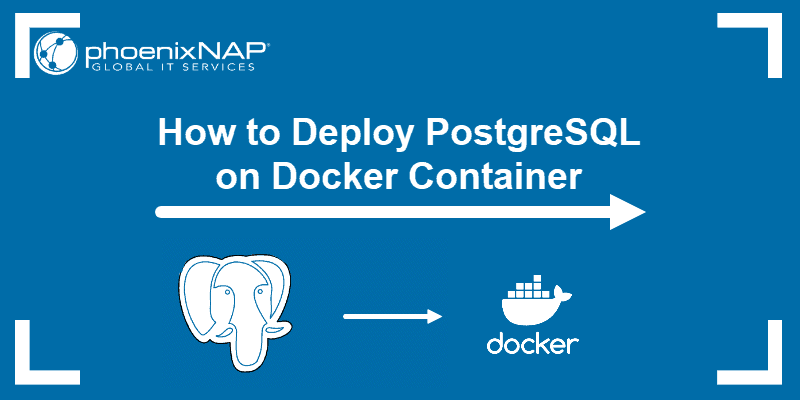 Deploying a Postgres container is simple. You can find the Postgres image for building these database containers in Docker’s official repository.

This guide shows you two ways to do so.

The first option uses Docker Compose, a tool for managing multi-container Docker applications. You can use Docker Compose to configure the Postgres as a service running inside of a container. In that case, you create a yaml file with all the specifications.

Alternatively, you can use a single Docker command with all the necessary information for deploying a new PostgreSQL container.

To deploy a Postgres container using Docker Compose, you should have this Docker tool set up on your system.

1. To ensure an easy and clean installation, we first want to create a working directory named postgres and move into that directory:

2. Next, use Docker Compose to download the Postgres image and get the service up and running. Do this by creating a new docker-compose.yml file with an editor of your choice (in this example, we used nano):

The yaml configuration file outlines there is a postgres service, built on the latest postgres image. You can decide on the newest Postgres version or specify the version number you want to use.

Finally, you need to define the ports on which the container communicates. 5432 is the default port number for PostgreSQL.

5. Now that you have the yaml configuration file, you can start the postgres service and run the container. Use the docker-compose up command with the -d option to put it into detach mode (allowing you to continue to run commands from the current shell):

6. You can check the logs with the command:

To return to the shell press CTRL+C.

Another way to deploy PostgreSQL in a container is by running a single docker command.

You can download and run a Postgres container by specifying all the necessary information in one command.

The command tells Docker to run a new container under a particular container name, defines the Postgres password, and downloads the latest Postgres release.

Confirm your PostgreSQL container is now up by prompting Docker to list all running containers with:

In this guide, we created a container named example and we can quickly locate it among other running containers.

Connect to Postgres in Docker Container

To enter a Postgres container, you need to execute using the container name and enable psql, the command-line interface for Postgres.

Once in the Docker Postgres container, we can create a database with:

Note: To view all the databases you have running on PostgreSQL run: l.

Connect to the database as the postgres user type:

With the database set up, the next step is to create a schema that helps you get a logical representation of the database structure:

Here you can create a table and add data into the table.

Note: If you want to exit the Postgres container, type in the following: q.

In this article you learned two different ways to run a PostgreSQL in a Docker container. After deploying a Docker Postgres container, you can start creating your databases with all the data required.

Deploying PostgreSQL in a container is cost-efficient in terms of infrastructure, it also supports CI/CD development, and streamlines deployment and application management.

Beside PostgreSQL you can also run MySQL and MongoDB on Docker.

Sofija Simic
Sofija Simic is an aspiring Technical Writer at phoenixNAP. Alongside her educational background in teaching and writing, she has had a lifelong passion for information technology. She is committed to unscrambling confusing IT concepts and streamlining intricate software installations.
Next you should read
Databases Web Servers
How to Connect to a PostgreSQL Database From Command Line in Linux
PostgreSQL is an open source relational database management system. In this tutorial learn how to connect to...
Read more
MySQL
How to List All Users in a MySQL Database
This simple tutorial analyses the commands used to list all user accounts in MySQL. Learn about additional...
Read more
MySQL
How to Fix MySQL 'Command Not Found'
The 'Command Not Found' error is a general error not only found in MYSQL. By learning how to deal with it...
Read more
MySQL
PostgreSQL Vs MySQL: A Detailed Comparison
Explore the differences between the two most widely used database management systems. PostgreSQL and MySQL...
Read more
© 2021 Copyright phoenixNAP | Global IT Services. All Rights Reserved.